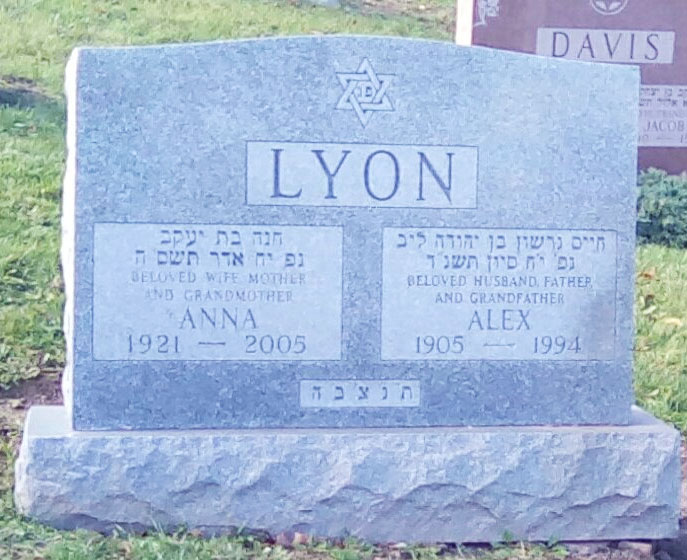 February 27, 2005 Anna Lyon, 83, died Sunday in Crouse Hospital. Mrs. Lyon was born in Pulaski, TN, and was a resident of Syracuse. In 1950 she was a co-founder and associated with her late husband for 55 years in the Alex Lyon n Son Livestock Company, which later became the Alex Lyon n Son Auction Company. Mrs. Lyon was a member of Temple Beth El and active in their sisterhood and Hadassah. Mrs. Lyon was predeceased in 1994 by her husband of 45 years, Alex. Survived by a son, Jack Lyon; a daughter, Esther (Bill) Axelrod; and two grandchildren, Amy and Jessica Axelrod. Funeral services will be noon Tuesday at Birnbaum Funeral Chapel. Calling hour will be 11 a.m. to noon at the funeral chapel, 1909 E. Fayette Street. Burial will be in Temple Beth El Cemetery. Contributions may be made to the Lyons Scholar-in-Residence Fund at Temple Beth El. birnbaum funeral service, inc
Published Syracuse Post Standard on Feb. 28, 2005
Burial Location
A111