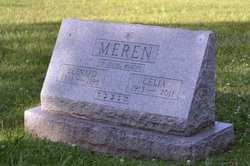 
Bernard Meren, 83, of 5100 Highbridge St., Fayetteville, died Monday at his home. Mr. Meren was a native of Brooklyn and lived in Syracuse for more than 50 years. Mr. Meren was a veteran of World War II. He was a supervisor for the U.S. Postal Service at the Clinton Square Office for more than 20 years. Mr. Meren was a member of Temple Beth El and the supervisors union of the Postal Service. During his retirement, Mr. Meren was a crossword puzzle constructor, having had his puzzles appear in The Post-Standard, The New York Times Sunday editions and Games Magazine. Surviving are his wife, Celia Meren of Fayetteville; one son, Gary of Fayetteville; two daughters, Barbara Moalem of Jerusalem, Israel, and Roberta Hope of Hingham, Mass.; and seven grandchildren. Services will be at 11 a.m. Wednesday at Birnbaum Funeral Chapel, the Rabbi Robert Rhodes officiating. Burial will be in Beth El Cemetery. Calling hours are 10 to 11 a.m. Wednesday at the funeral chapel, 1909 E. Fayette St. After the funeral, friends may call at their convenience through Sunday at the family residence, 5100 Highbridge St., Building 22D.